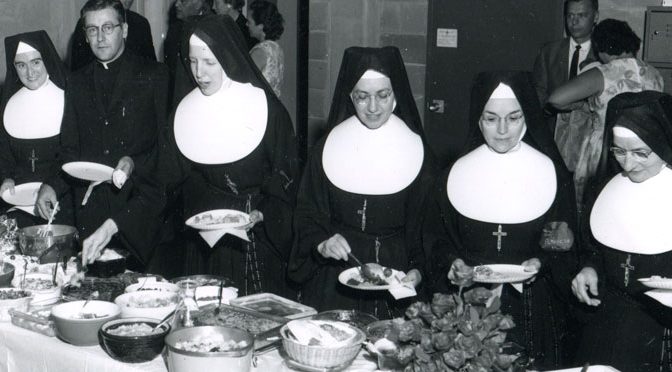 The beginning….
In the spring of 1964, a large sign reading “Future Site of Saint Thomas More Catholic Church” was placed at the corner of 118th and Holmes. Today, a church and school continue the presence of this Red Bridge Catholic community.

Monsignor John Huhmann was appointed to establish the new parish with 250 families. Under his fine leadership, with Masses offered temporarily at Avila, the community grew. In July 1965, ground was broken for the church and school. By June 1966, the church was ready for use. In the fall 1966, the school opened with 203 students in the first five grades. The first graduation was held in May, 1970.

When a building boom in Red Bridge, Verona Hills and the surrounding area happened, the membership grew to 1,400 families. Additional classrooms were added to the school and plans for a larger Church that would accommodate 650 persons became a reality. In 1983, the present church was completed. Monsignor William Blacet was the Pastor.

New Facilities
In 1984, a master plan for the continued growth of the parish was developed. This plan enlarged the school preschool and enabled the music and art programs to be expanded. More Hall was constructed to provide a parish hall suitable for social activities, meetings and programs. The rectory became the parish office building to accommodate the expanding staff. A new residence for the priests was constructed. Father Patrick Rush was pastor.

Growth continued strong through the 90’s. Father Bill Bauman became the 4th pastor in June of 1992. An 8-room addition to the school was built in 1996. Enduring relationships were built not only with Seton Center, but also with the parish of San Andres, Itzapa in Guatemala (sister parish) and Saint Louis Parish on Swope Parkway (twinning). Ministry teams continue to take a strong role in the leadership of the parish. Over 850 “engaged members” volunteer weekly or monthly to carry out the ministries of the parish. The school grew to over 650 students in the 2000-2001 school year. Some 50 seats in school were made available to non-parishioners for the first time in 2003. This brought a new diversity to the school with a few non-Catholic students added to the enrollment.

The church building received a major clean up and redecoration in the fall of 2003. Besides the new look to the building, the parish staff also gained a new look in 2003 with the addition of a Director and Assistant Director of Youth Ministry.

Father Bill’s retirement. With him, he brought a new perspective and fresh ideas. A new Pastoral Council was formed in January of 2005 to address long-range planning that affects the parish as a whole. Father Weiss also began conversations about unifying the parish and the school. In July of 2006, Father Don Farnan became the 6th pastor. He continued the unification of the campus as a whole, bringing together not only the school and the church, but the people in leadership (staff, Pastoral Council, Ministry Teams, School Board, and Development Council, later to be re-named as the Stewardship Cabinet). He directed the Pastoral Council to review the overall Parish Mission statement to keep everyone headed in the same direction, looking at the big picture.

Moving Forward
In the fall of 2007, Saint Thomas More Church embarked on a three-year Capital Campaign to make some renovations at the school and to expand the church narthex, to include an elevator. Work at the school was completed early in the campaign and the narthex opened in September of 2009. In addition, the north and south stained glass windows were re-framed.  A parking lot was added north of the Parish Office and the school parking lots were re-surfaced. The School added Spanish and Algebra and a counselor in 2008. In 2009, technology was upgraded to internet connections, classroom projection equipment and whole class response systems in every classroom.

View the Jubilee Banner up close. See who signed it!

Golden Jubilee Party (with The Elders)
Was Thursday 22, 2014

Fifty Quotes on the Fiftieth Anniversary (click to read)

How Great Thou ART Show

How Great Thou ART show celebrated the talents of our parish family and friends. Art of all kinds was on display. From amateur to professional, anyone is invited to participate. The evening  showcased the art, an art raffle, live music, drinks and small bites. No ticket required.

Can’t find it? Try this…

Our Mission is to provide a welcoming, inclusive and loving community by proclaiming and living God’s Word through worship, education, and social justice.

…to provide a welcoming, inclusive and loving community by proclaiming and living God’s Word through worship, education, and social justice.

To update an existing email signup, click on the Update Profile link at the bottom of any subscription email.